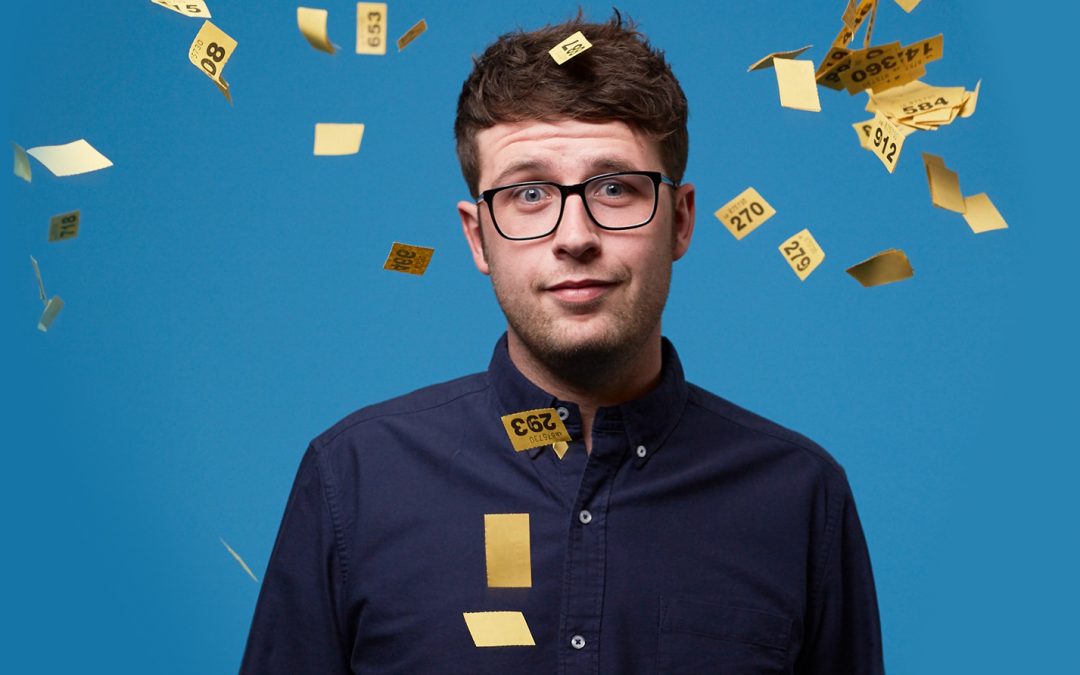 Chris Washington Dream Big (Within Reason) was performed in the intimate Aldrige Studio, at the Lowry Theatre Salford. Two sell out shows in a row no less. This space undoubtably complimented the show’s theme and title, but comedian Chris Washington is destined to fill the big arenas. Despite his ambitions being somewhat subdued by his “enjoy the moment” philosophy.

The former postman has an instantly identifiable appeal. His personality shines through as relaxed and unfazed by life. When an audience member on the front row turned up late and proceeded to chat to his date, Chris’ response was very much in theme with the “easy life”, relaxed stories he had been telling to the audience, before this interruption. I’ve seen many reactions to moments like this, however Chris was polite and calm, presumably through utter disbelief or his years in of experience comedy clubs of all kinds. He successfully resisted the chance to turn the latecomer into an unrelated, 5 minute set, and opted for politely telling the audience member to be quiet and then carried on with the show.

Through a series of stories dating back to his childhood; the audience can tell Chris is a man of simple tastes, who’s just plodding through life and enjoying the moment.

Tales from his childhood, included obsessions with Brookside, which lead to bitter disappointment at the lack of figurines one Christmas. Choices for work experience as a 15 year old “male dinner lady”, because it was short hours with free food. Plus the terrible defeats his football team received; all lead to why Chris is just happy with life little highs.

Moments like spotting his now Girlfriend, spitting out cheese mayo the day they first met, and the time she won a Dyson hoover are what keep Chris happy.  He wants to enjoy every second of the simple things that make him feel content. Rather than miserably reaching for the next life or career goal, without enjoying the satisfaction of achievement, like a lot of people do.

Chris’ observational comedy style is identifiable across age ranges. His tales of “Dad-vice” strikes a cord with anyone who’s ever been in need of useful help from their father and received a totally useless response. Although Chris isn’t the type of comedian to direct jokes solely at everyone else, he interlaces each story with self deprecation; mostly around his innocence and lack of drive to do better. 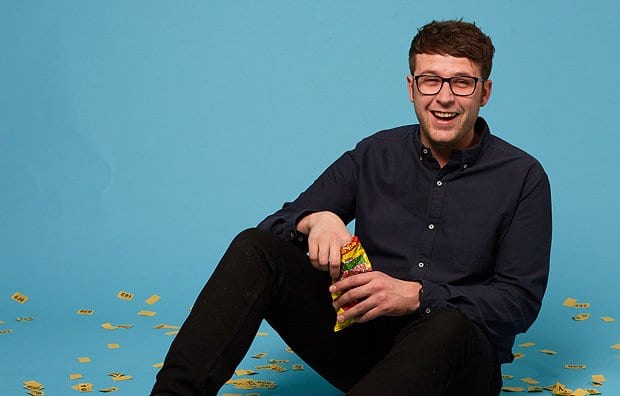 He successfully mastered the art of weaving previous punchlines, referencing them in addition to the punchlines of other stories. A particularly clever approach to comedy that not many can do successfully. The most impacting was his ability to drop the simple, yet effective line of “smothered butter” used previously; placing it into an unrelated story of his days as a postman.

The butter reference came from the story of a misunderstanding during his work experience. The two dinner ladies he was working with were talking about “the change”. A then 15 year old Chris, mistook that as a reference for the change of school meals, introduced by Jamie Oliver’s healthy school meals campaign.

When the ladies were talking about concerns with dryness, he thought it was about vegetables. He encouraged them to “smother it with butter, no one will know”. Resulting in a roar of laughter from the audience. That reference was then dropped in when he talked about a family member cooking for him, during his postal rounds. He said simply “they smothered it with butter” then paused to hear the audience’s reaction. It was a mixture of appalled noises and laughter. Smiling himself, he announced “the bread, of course, she wouldn’t have greeted me at the door with a vagina smothered with butter!”. Which of course encouraged another roar of laughter.

Furthering his identifiable strengths in observation, Chris talked about how every has “that friend we apologise for”. He recalls an evening out that has hilarious consequences and and unbelievably lucky escape from a fight. It is his descriptions of his friend’s behaviours combined with his own internal dialogue that make this story, and indeed all his stories a hit with the audience.

Chris underplays his own skill in delivering the humour in his “every day” stories. His ability to elaborate on any incidental detail whilst creating an identifiable background story, and intertwining his own internal thoughts emphasises his talent, despite his modest delivery. His comedic skill in writing and deliver, elevates everything he has to say to a level beyond the realms that the theme of this show would allow. Chris Washington, is one to watch. Despite claiming he doesn’t dream of appearing on Live at the Apollo, he is certainly destined for great success. Includingigger and better shows than the Apollo and definitely bigger stages than the Aldridge at the Lowry.