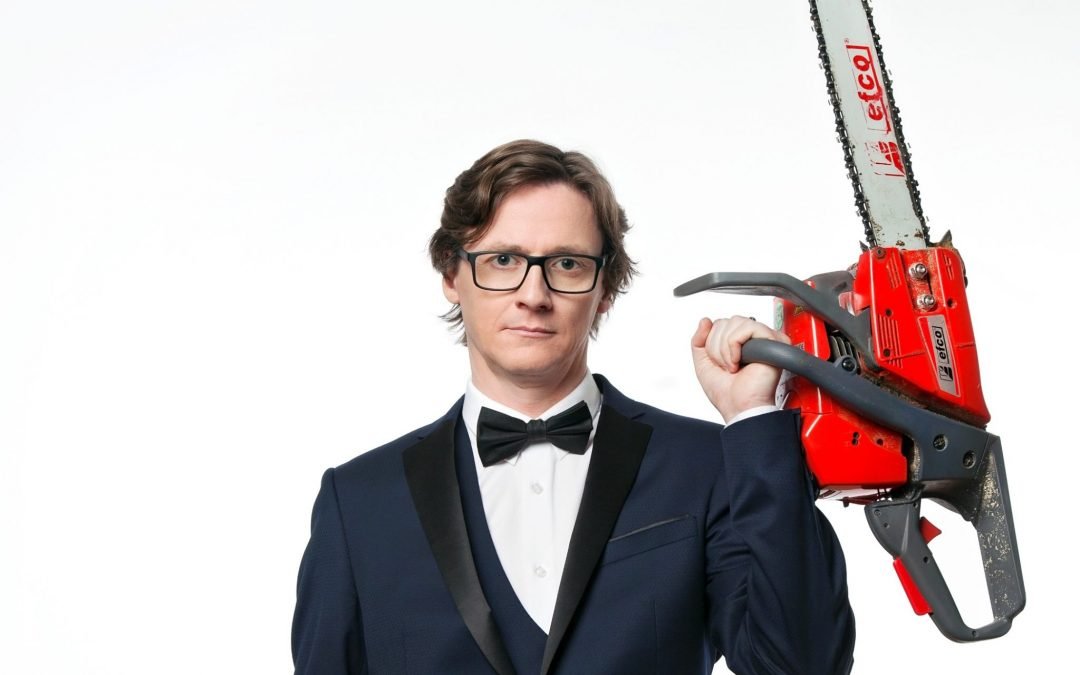 Professional rambler Ed Byrne, has a new show named ‘Spoiler Alert’. Despite what the title suggests, this show does not disappoint. This very cleverly coordinated show is about how we are now spoiled and how Ed spoils both himself and his children.

From the start Ed admits he is fully immersed into the middle class world of large trampolines, unnecessarily large cars, price ranges based on a ‘reasonable skiing holiday’ and how very different parenting is now. But he’s not entirely bragging, as stereotypically expected from a middle class adult. He performs the show as if he were grateful for the audience paying to fund his spoilt lifestyle.

Slightly embarrassed by how he’s spoiled his “posh English boys”, Magnus and Cosmo, Ed confesses they are becoming the kids he’d have hated, when he was at school. They have an ’embarrassingly large trampoline’, that they expect him to bounce them on. He is infuriated with himself over the ease of letting them have their iPad on request. Emphasising how he is happy to give them the life he never had. Because he believes that is part of what being a good parent is about.

Referencing their meal choices of pesto and pasta, leads him nicely into how different he is as a parent in comparison to his own up bringing. He starts out by explaining he grew up in the 70’s. When he was younger he was given a pop and a packet of crisps and  told to sit outside the pub. In which his father drank for most of the afternoon then proceeded to drive him home.

A completely contrasting image, when he highlights expectations of parents in more recent years. Stressing the point that he grew up in the 70’s, and that was ‘normal’ behaviour. Ed frustratedly points out “You actually have to care about what kids do or say these days”.  His observations on what it means to be a parent now, in comparison to his upbringing, instantly makes him relatable. His comparative tales creates an appreciative laughter within the audience member of a similar age.

The story of his upbringing perhaps explains why Ed is happy with his spoiled lifestyle. He is happily married, at one point admitting that he’s married to his best friend. He had the option of buying an Aga. Although he decided against it and ranted about his reasons why. He paid to make travel documentaries with his friend Dara O Briain. Laughing about how his wife and many others saw it as a fancy holiday.

Ed’s transgressive approach to observational comedy is sublime. His articulate delivery appears unrehearsed and informal. It is easy to see why this show was a complete sell out at the Edinburgh Fringe Festival. Each joke is clever, even the sillier ones that Ed winces at.  A well thought out show, full of stories that effortlessly intertwine with each section. Despite his tendencies to ramble off into a world of digression;  Ed has the audience captivated throughout.

Where Can You See Ed Byrne Spoiler Alert?

Ed’s show is currently on tour all over the UK. you can find out more information on his website edbyrne.com. (If you’re near Derby get a ticket). To keep up to date with all Ed’s latest news follow him on Facebook.