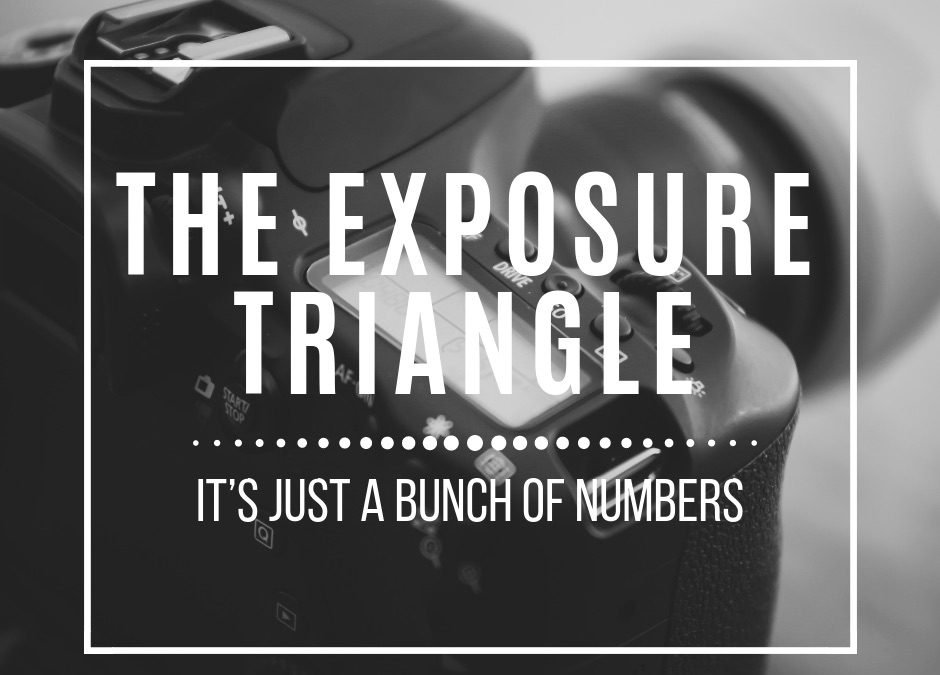 (No this isn’t a science lesson and it isn’t that difficult to understand).

﻿What is the Exposure Triangle?

Simply put it is the collective use of ISO, Shutter Speed and Aperture to make sure your photographed subject is a true reflection of what it should look like. The exposure triangle is essentially the photographer using manual mode, usually with some sort of artistic flair. When applied properly, alongside great composition techniques, this is what makes up the difference between ‘good’ photographer and a ‘mind blowing, awesome photographer’.

Why is Aperture important in the Exposure Triangle?

Well not only does aperture control how much light reaches our camera’s sensors, it also controls how much detail our camera captures. Here’s where it can get confusing. The lower F-numbers allows in more light, but a lot less detail and the higher F-numbers lets in less light but a lot more detail.

Imagine it’s a sunny day, you’re trying to look at something but its so bright your eyelids narrow. You do this instinctively to allow your eyes to see the details in front of you. Much like your eyelids, your F-numbers are controlling your lens’ eyelids. This allows the sensor (your camera’s eye) to capture the detail within the scene in front of it and record this onto the memory card (your camera’s brain).

If you want your subject to be in focus and the background isn’t that important then set a lower aperture (a lower f-number). This is a great technique for portraits, product photography or any situation where one or two things are the primary focus of your photograph.

If you’re photographing something where lots of detail needs to be captured in the image then set a higher aperture (Higher F-number). This is good in landscapes, group shots, street photography, architectural photography and any other time that all the little details are important.

Why is Shutter Speed important in the Exposure Triangle?

Shutter speed also allows us to capture movement within a photograph.

Have you ever seen those photographs of a city scene with all the lights blurred? The ones where all the vehicles vanish with only a trail of light in their place? It’s like something out of a Harry Potter book right? Well these were done with a slow shutter speed.

The time it took for the lens to open and close the shutter was so slow that only blurs of prominent moving objects were available for the camera’s sensor to record. In that case, it was the bright lights on the moving vehicles.

This is also a pretty good effect when you want to photograph a busy street, or a watercolour effect on a moving river. But it is also a good technique to use, when you want to capture the stars in the sky. (Think about how long that light has to travel to your camera? Give it a break and make your camera have patience for it’s arrival with a slow shutter speed).

One warning I must give you about shooting with a low shutter speed, your body’s natural movement can impact how clear your image is. So when you shoot with a lower shutter speed always use a tripod!

Then there’s the other side of shutter speed, the super powerful speed that can be quicker than you can blink. Think about all those photographs of cars racing at the Grand Prix. Or footballers in the middle of taking that vital shot to win the game. Or any fast moving object that you think ‘woah that’s an amazing photograph, it was moving so fast, how did they get it so sharp?’. That’s the ‘magic’ of a fast shutter speed.

Why Is ISO so Important to the Exposure Triangle?

Like the others, the lower the ISO number, means the lower the amount of light is going to reach your camera’s sensor. While increasing the ISO means more light will reach your sensor it also introduces the grainy element that rarely compliment’s an image The grainy element is known as ‘noise’, and this impacts the level of detail that your camera will be able to capture.

So by all means, increase your ISO when you need to, but do it with caution. If you can lower your shutter speed a little and widen your aperture to achieve the exposure you want, then do it.

The Exposure Triangle; just juggling a bunch of numbers.

The various elements of the exposure triangle are what you need to consider before every shoot you start. In doing this you will capture the photograph you wanted. It’s a simple case of thinking about how you want your photograph to turn out.

If it’s an artistic portrait and the background isn’t important, the shoot with a fast shutter speed and wide aperture. If it’s movement and lots of detail that you want to capture, like a river moving through the countryside, the shoot slower with a wide aperture. Then adjust you ISO to make sure your image isn’t too dark or too light.

Juggle those numbers, experiment with them and get creative.

The Exposure Triangle. A No Nonsense Guide by Aberrant Perspectives.