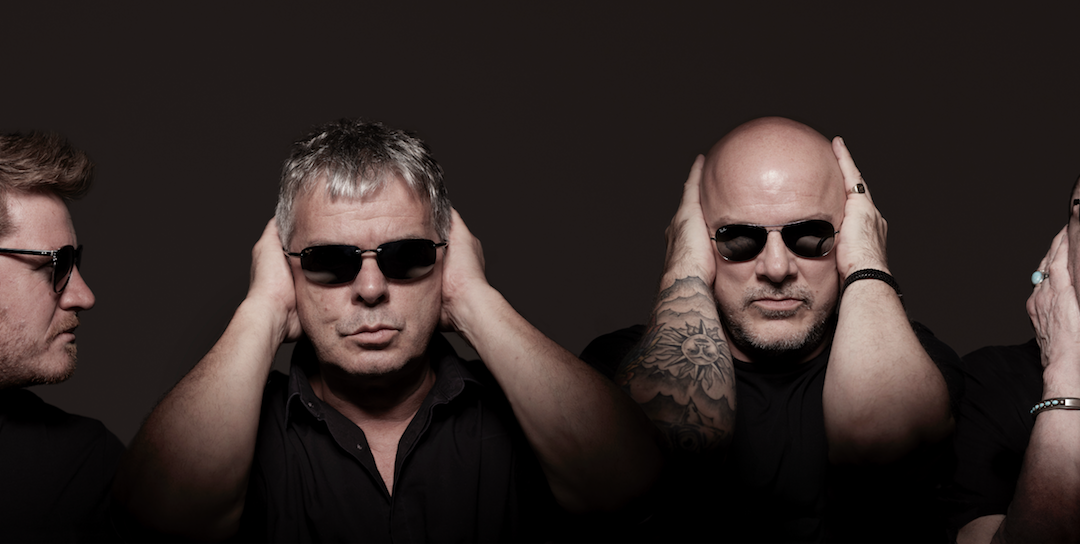 March 2018 marks the start of The Stranglers’ up coming Definitive tour. I was lucky enough to grab an interview with the lead singer Baz Warne. When I asked about his thoughts on the upcoming tour, Baz said “Yes we are looking for to it, we start rehearsing next week. Then we go to New Zealand and Australia to perform a few shows. It’s busy times but we thrive on it. I don’t think any of us would have anticipated that at this point in our careers and at our age that we’d still be going as strong, or that the places are full”.

The Stranglers have been performing for over 40 years. They have over 23 UK top 40 singles and 17 UK top 40 albums to choose from to add to this tours’ set list. Picking a set list has to be the most difficult part of preparations. Baz explained the process. “We always look back over the last few years, to see what we’ve done. We’ve got so many albums to pull material from. I’ve only been in the band for nearly two decades, I like to make suggestions to the boys in the band, maybe songs we haven’t played before with me in the band. It would be very easy to jump back on the nostalgia band wagon and just play the hits, year after year, but where’s the fun and excitement in that? Firstly we look to please ourselves, we make suggestions and fire them around by email, that was in October. Then the shortlist is made up.

It seems things have changed over the years for the Stranglers’. “This whatsApp thing has been a revelation, because we just have a group chat and everyone gets all the information at the same time it’s brilliant! Now we’ve all got an idea of what we’re going to play I’ve been at home practising, everybody’s at home doing homework and then we get together and rehearse solidly for a week to ten days. Then hopefully, after two or three gigs, when everyone’s made their hidden mistakes, all of a sudden it becomes smooth. There’ll be songs that were suggested that wont work. We try them then realise and kick them into touch. It’s quite a democratic process that takes a bit of thought”.

Despite wanting to add a touch of excitement and originality to the tour Baz admits that he knows there are some songs they can’t miss out. “There are so many songs that we know people want to hear. But we know which songs ‘we must play’. There are a few songs that without exception we play every year, but we try to get obscure. We try to get new from the last three albums with me on, so that we’re playing newer stuff”.

Speaking of newer songs, The Stranglers are currently writing their new album. This will be their 15th album, which their hoping to release this year. “Hopefully we’ll be playing some brand new stuff (on tour), which we’re in the midst of writing now”. Baz excitedly explained “it’s all good, but an on going process though”.

Baz joined the group in April 2000, after a career that has spanned nearly two decades I asked if he could tell me which was his ultimate highlight. “The day I auditioned has to be my favourite moment in the band. I had belief in myself, I wouldn’t have auditioned if I didn’t think I could do it”.

Though it was going to be the audition that changed his life forever, leading to work wide tours and a string of success. He admitted “ I deliberated going, because I was married at the time, my then wife didn’t want me to do it. But in all the years we were together she never asked me to do anything, so I respected her wishes and, would you believe it I turned it down. But that only lasted the weekend, it left me in turmoil. I ended up going and I got the gig on the spot. I’ll never forget that day. 6th April 2000; it’s seared on the front of my brain”.

Since then the Stranglers have seen success with Baz Warne as their front man. In 2010 the played Glastonbury. “Glastonbury 2010 was quite astonishing. I think we were the first band on, it was 2 o’clock in the afternoon on a Friday. Having never been to Glastonbury I didn’t know what to expect, but it was beautiful english summer weather. We had the same slot Lady Gaga had been on the year before. She managed to pul 35,000 people, I believe, which is no mean feat. We managed to pull 85,000 people. Walking out onto that stage, we could all of Glastonbury, we could see flags, banners, people on shoulders. We were greeted like long lost heroes. The only problem with that gig was that we played for an hour but it felt like three minutes. When you’re in that kind of zone the time goes unbelievably quickly, I was thinking to myself I’ll never forget this”.

With over 40 years on the road, and a reputation for being a ‘punk rock’ band, I’m sure there will be differences between then and now. I asked if it’s still ‘sex, drugs and rock ’n’ roll’. Baz laughed “Oh wow what a fantastic question, it depends how much detail you want me to go into.” Of course I replied telling him to tell me whatever he was comfortable with, and what won’t land him in too much trouble. “Rock ’n’ roll will always be there, that’s what we do.”

“The drugs, well we’ve all done our fair share of them. I don’t think I’d be telling any tales if I say everyone’s been there and had their moments. When you’re doing what we do you’re around that environment and there’s so much of that goes on. Not these days though if i’m honest, we’re all steaming into and through middle age and into old age. But the sex, well we’re all married. we’re all good boys these days. But that’s very much been a part of it in the past.” Still laughing Baz said “That’s all I’m going to say about that!”

The stranglers are regularly described as ‘Old punk rock warhorses’, I wanted to know if he thinks it even exists. “I think it’s more of an attitude if I’m honest. People use the term ‘punk’ for many things now. I think what people perceive punk music to be probably lasted about a year, nearly 40 years ago. It’s more an ethos and an attitude. Personally I would have never described the Stranglers as a punk band anyway, it was far too cerebral for that and far to well played, you know? I mean a lot of punk bands really couldn’t play, the Stranglers were far, far superior. I think it’s just because they came around at that time. There was a couple of lads who had leather jackets and there was fights at the gigs and it was in the 70’s. But on the other side of it the keyboard player used to smoke a pipe with a big droopy moustache, I mean you can’t get much more ‘un punk that that!”

Beyond their Definitive tour, and a mention of writing a new album, I wanted to know what plans the Stranglers have for 2018. “Well of course we’ve got the big tour that kicks off in Liverpool this March. We’re also writing our new album and we’re very ensconced in that. There’s recording sessions planned. We’ve got some time in a rented house in the middle of nowhere, down in the south of England where we’ll take all of our equipment. We’ll get together for about a month to bash some songs out and look at each other across the kitchen table with a bottle of wine and a couple of acoustic guitars and write material. It’s a creative year this year.”

“We’ve got big plans for next year. Obviously when summer comes along and you put a big block around June, July September. That’s Festival time and we travel all over Europe doing summer festivals most weekends and somewhere in the middle of all that we’ve got to work the new material out. So its, well you know what it is, it’s lovely. At this kind of juncture of our lives to still be so busy and still be so in demand. We can barely believe it. I mean we have great faith and confidence in ourselves. The arrogance in the band goes beyond anything, you’ve got to have that. You’ve got to have the swagger of else how would you survive? But by the same token it’s still flattering.”

The Stranglers ‘The Definitive’ tour starts at the Liverpool O2 Academy 6th March and travels all over the UK throughout March. To find out where they’re going and how to book you tickets, go to their website: http://www.thestranglers.net 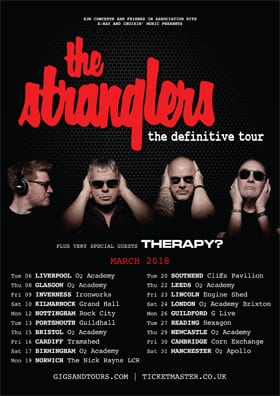 (This article and its contents are copyright of Aberrant Perspectives. If you would like to use them Contact Us Here.)