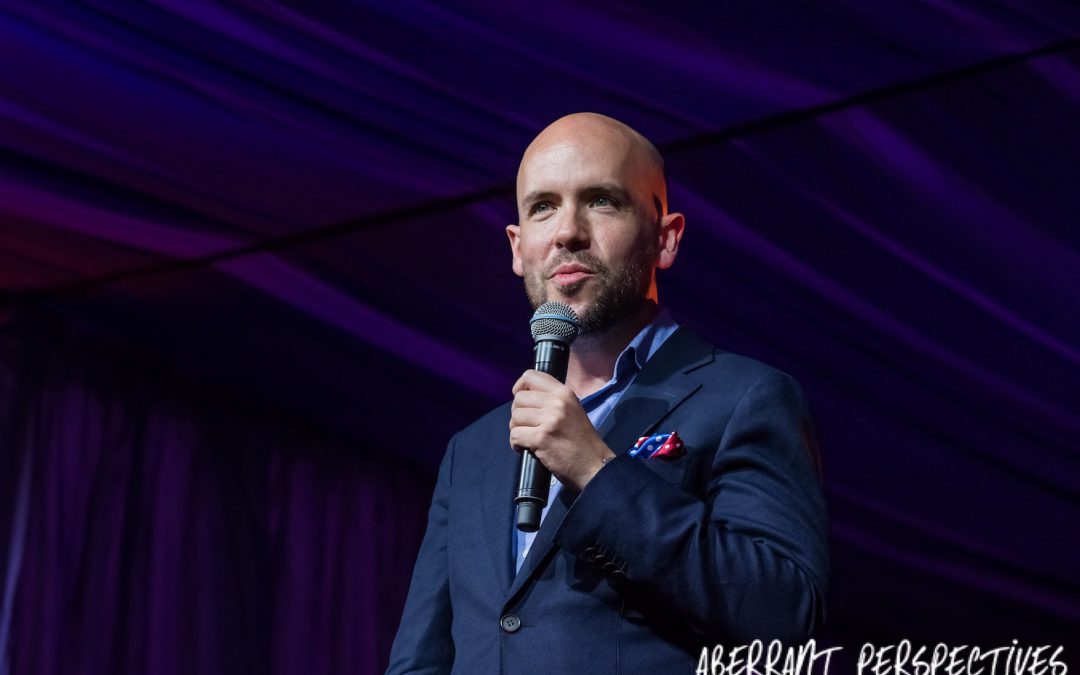 The wickedly funny Tom Allen revealed his views on single life, living at home with his parents and Gay marriage to the audience in the comedy tent at Latitude Festival 2017.

Tom Allen is the kind of comedian that gets away with all sorts of outrageous comments. His delivery of  his wickedly funny jokes, is flirtatious and charming, connecting instantly with the audience. Within minutes of being on stage he amusingly flipped the stereotypical references of the Gay community round to straight people. “Are there any straight people in the audience? I just love straight people, they are so funny, I want to set them all up with my straight friends”. He addresses the stereotypes in a brilliant way, making the audience howl with laughter at his well thought out jokes. 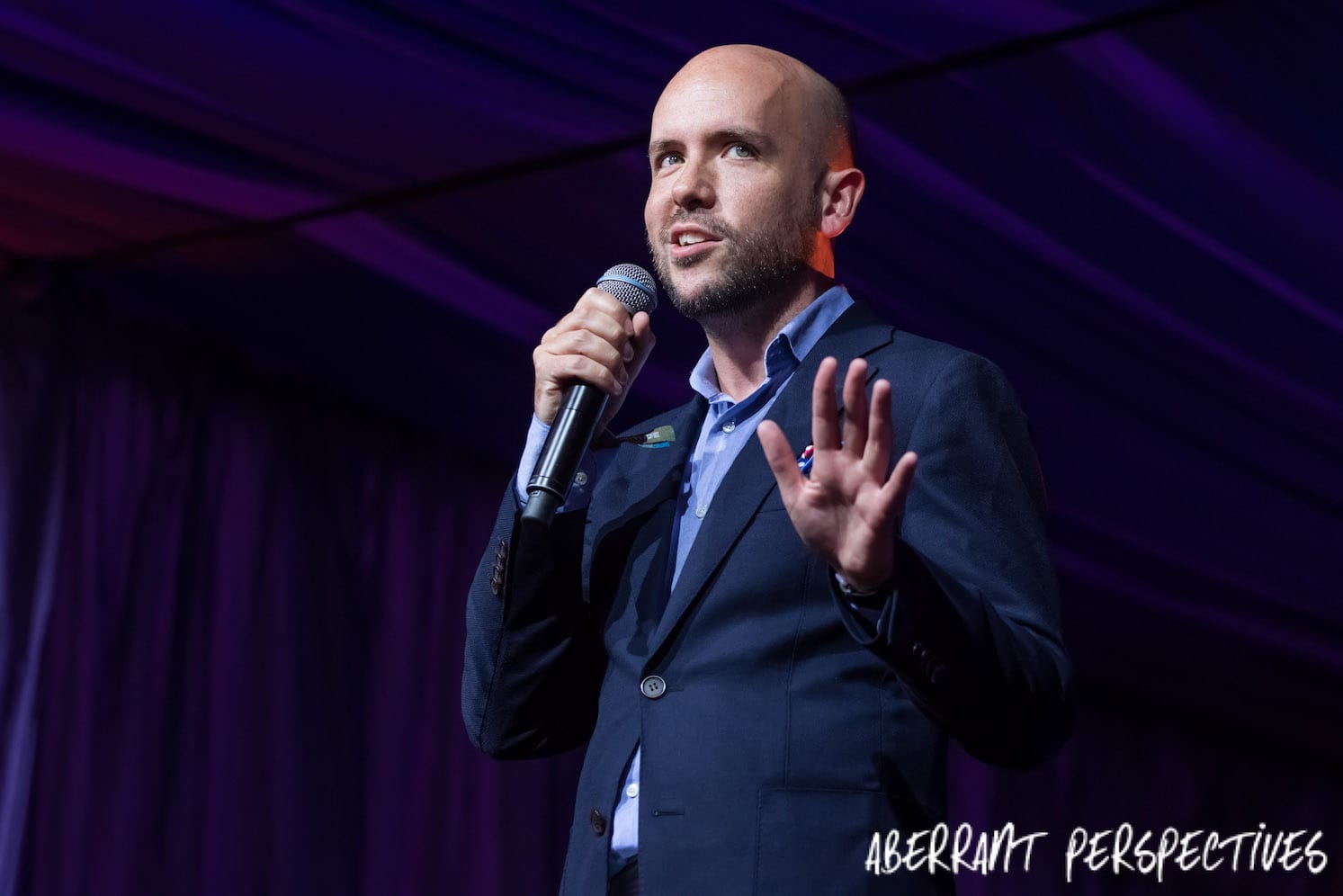 Shortly after his introduction to his sexuality and single status, Tom spotted the BSL interpreter. With a devilish smile, he proceeded to ask how to sign a wide variety of sexual positions. Tom’s requests were delivered with a flirtatious smile, making some of the outrageous requests forgivable, and the results were extremely funny. The interpreter stood her ground, signed along and then decided to have some fun of her own; by asking Tom what they meant, so she could sign them accurately. Laughing, Tom declined to expand on the references and moved on to his thoughts on Gay marriage. 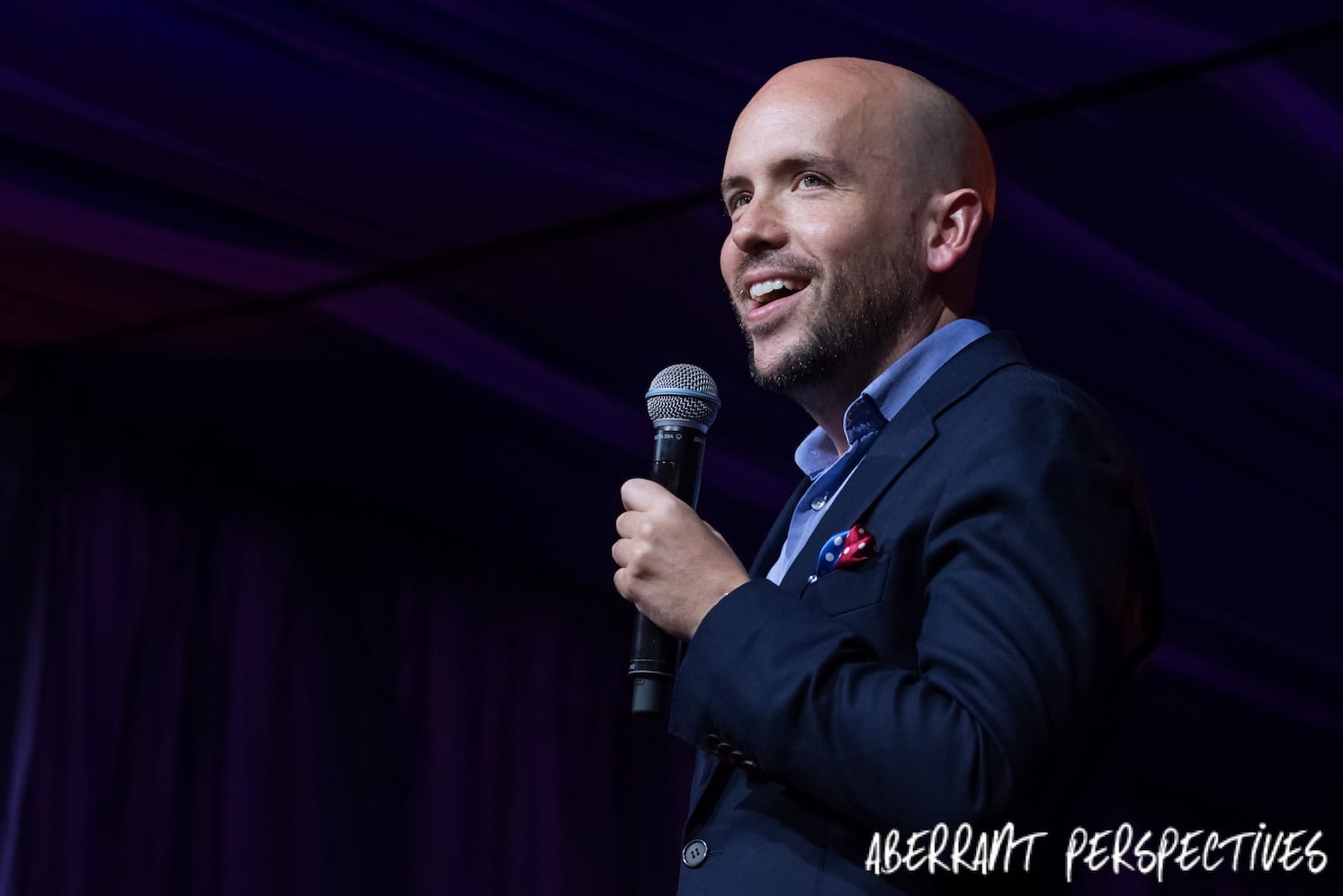 ‘Garriage’ is Tom’s amusing term for Gay marriage, he told the audience about how he believes in equality for all. “Garriage is designed to bring equality, so Gay people can finally be as miserable as straight people”. Despite mocking the idea of marriage, Tom agreed that deep down everyone wants the same thing; “to have an argument in Homebase”. The audience could not contain their laughter, whilst Tom delivered several stereotype mocking jokes. 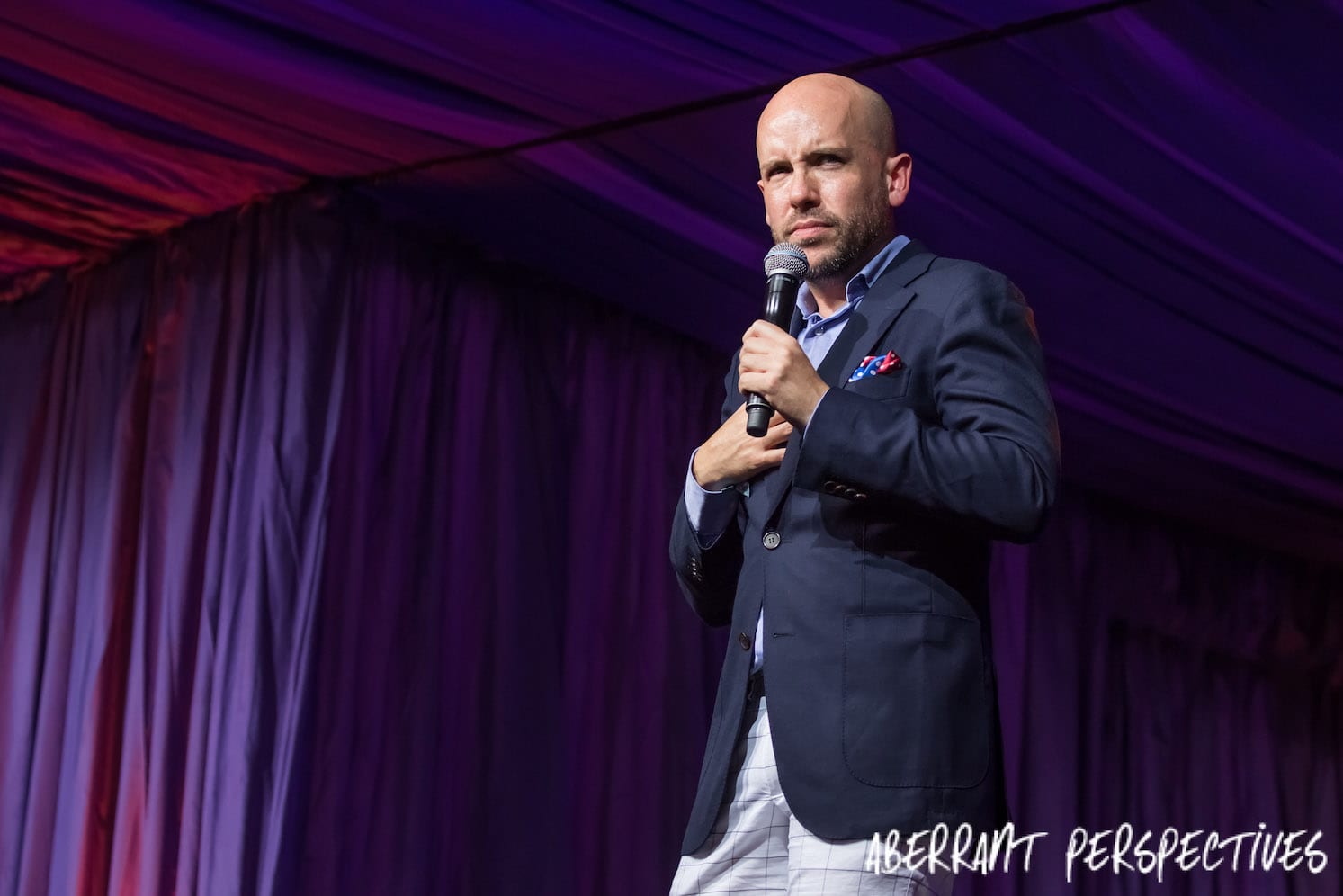 Single life for Tom is fine, until his coupled up friends tell him he will meet ‘the one’ and inform him that everything will change. “The one will make you settle down and want to have a family”, Tom quoted whilst rolling his eyes. He talked about how he was happy being single, without children, and how he couldn’t think of anything worse. With examples of interactions with his friend’s children, he then talked about how things have changed since he was a child. Party bags were an example of how things are different, asking the audience do they even exist anymore, to which a child shouted out that they do indeed still exist. 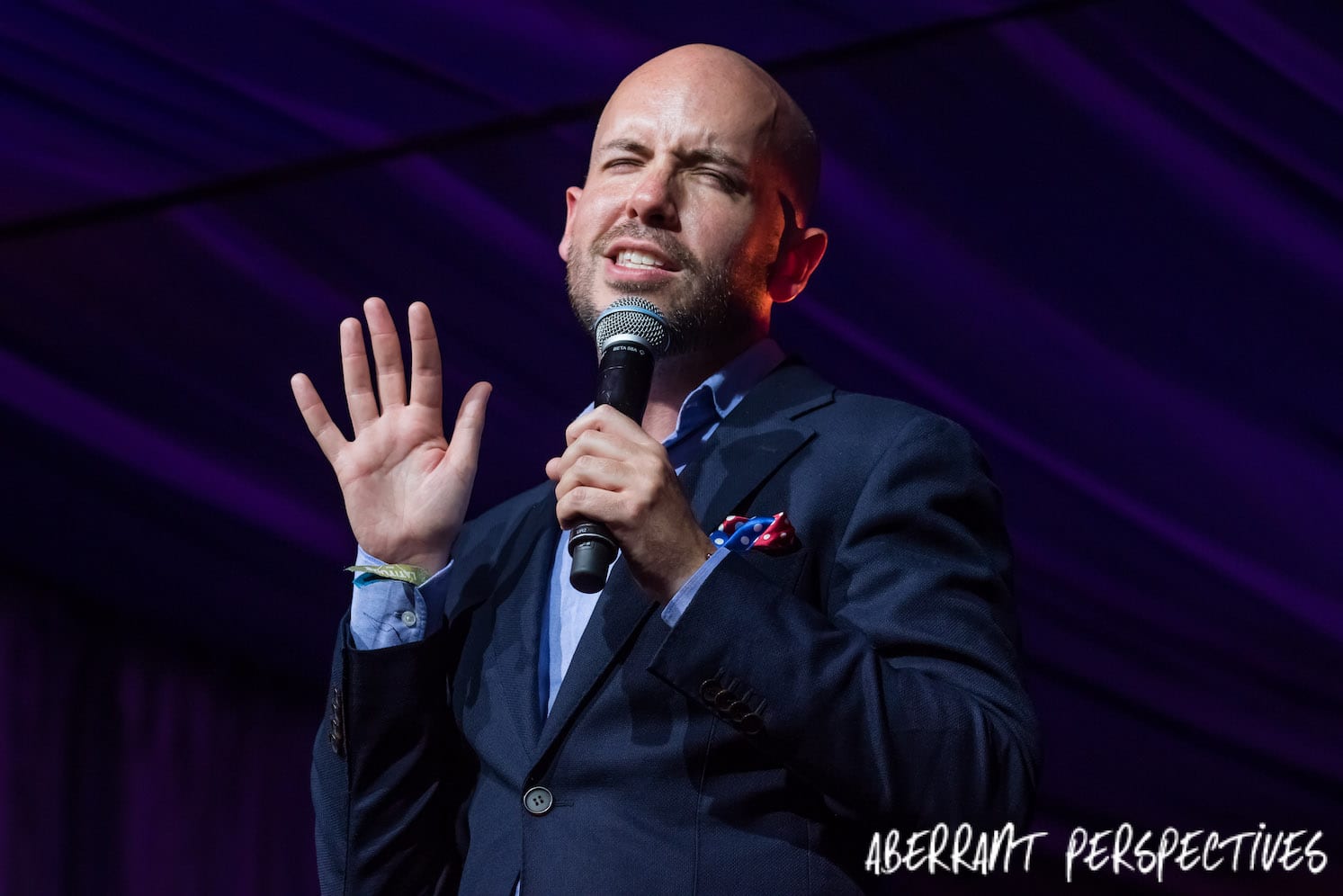 “How long have you been sitting there?” Asked Tom slightly bemused to see a young child in the audience. “All day!” came a proud response from an eleven year old boy. “So you saw the signs I asked the interpreter to do?” Tom enquired, with what can only be described as a thoughtful look, presumably he was contemplating the idea of cleaning up his act. Thankfully he didn’t, and there was no real reason for him to do so, due to the nature of his set until that point, it would have only disappointed the audience. 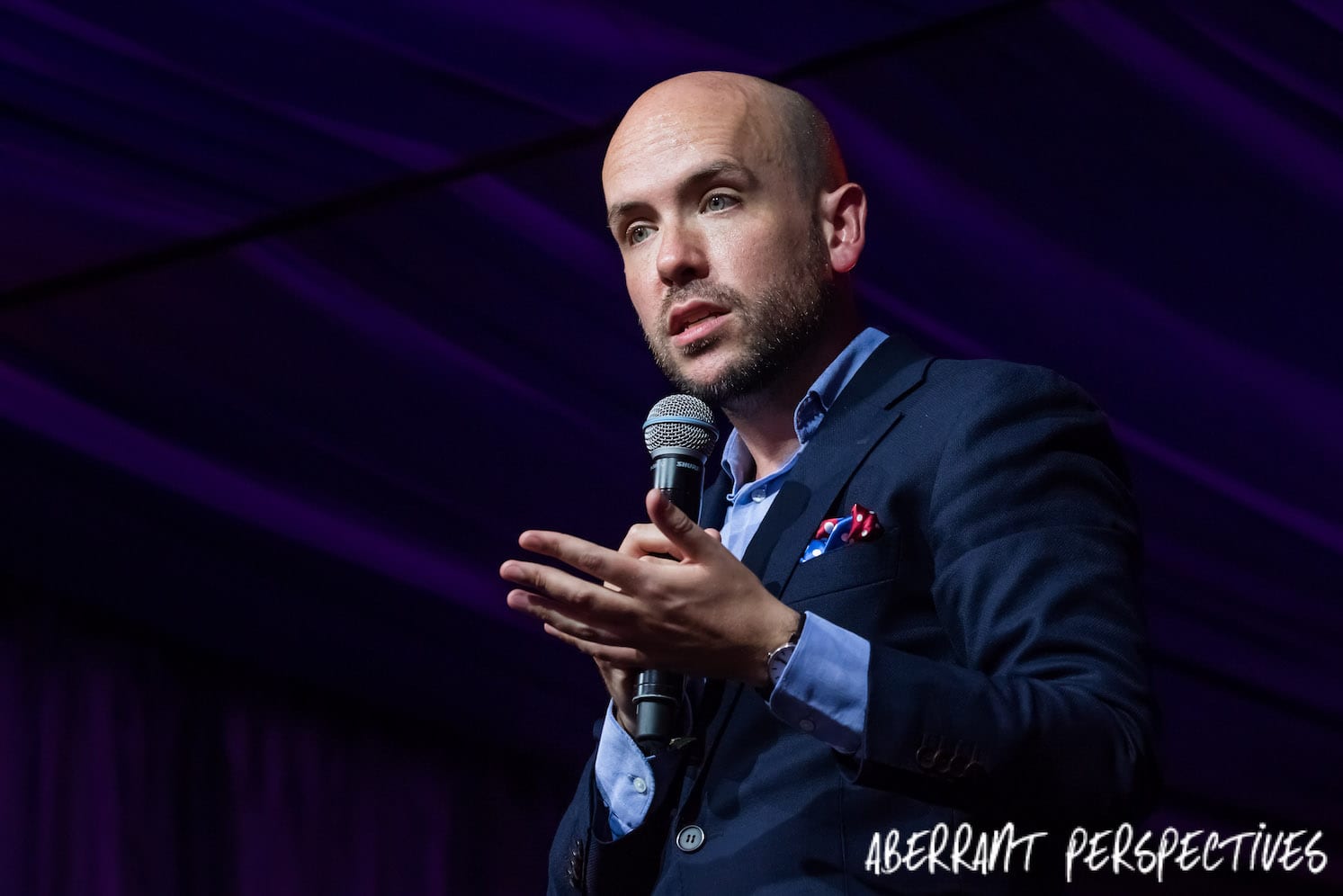 The boy became very vocal throughout the last ten minutes of Tom’s set and Tom engaged well with his miniature heckler. Retaining all the charm and flirtatious manner he had started out with, however he appeared to become more devilish. “What’s the worst swearword you know?” Tom asked, grinning in a similar way to the Cheshire Cat, from Alice in Wonderland; the audience laughed louder. “Don’t answer that!” came the voice of another child further up the same row, the heckler’s older brother. “There’s another one?? Where are your parents?!” Tom exclaimed whilst barely containing his own laughter. 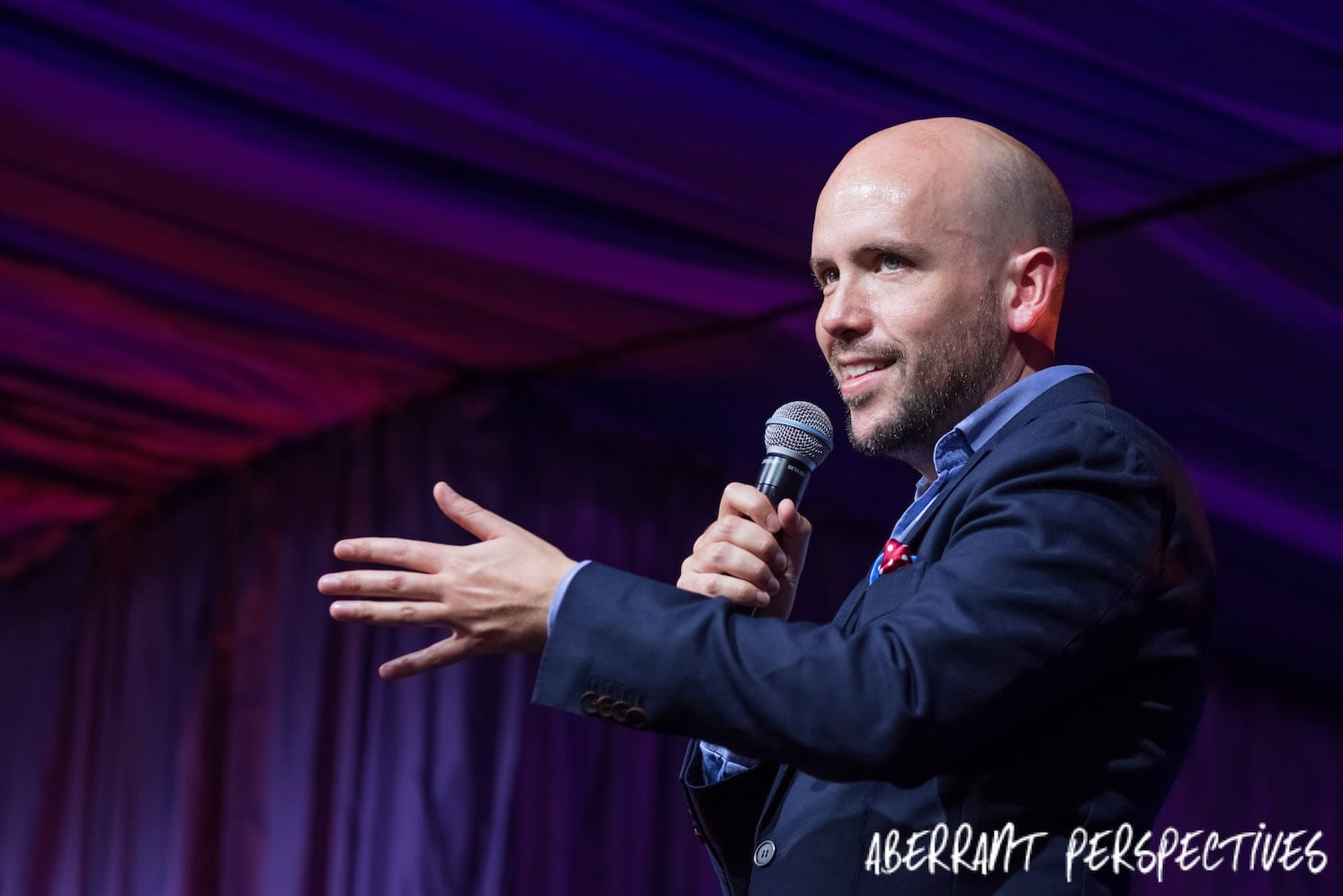 It turns out that their parents were at the outside of the tent, Tom teased them for ‘abandoning’ their children whilst informing them that it’s a festival not day care. Neither the parents nor the audience took offence, this like the rest of Tom’s set, is due to the endearing and charming way that he delivers even the most outrageous of comments.
Tom’s performance at Latitude was flawless, despite miniature hecklers throwing a complete curveball at him. He remained fabulous and wickedly funny throughout and the audiences cheers only confirmed that Tom is indeed a very talented comedian.

Tom is currently performing his new tour ‘Tom Allen, Absolutely’ all over the country. More information about where to see him, and how to book tickets, is available on his website www.tomindeed.com. You can also find out what he’s up to by following him on Instagram and on Twitter.